Before our house was sold in February 2019, and before Bravo was found and purchased, we had already planned a trip to Ireland and Netherlands with four of our friends… Mark and Dawn Jeseritz, and Chet and Lynette Kenoyer. Ireland was chosen partly because Nora and Dawn have Irish heritage.

Netherlands was a once in a lifetime chance to cruise the canals of Friesland on Chet and Lynette’s 113-year old barge, Vertroweeten.


Strangely, the timing of the trip overlapped our move onto Bravo which was docked in Shelter Cove Marina on Hilton Head Island, SC. So, we packed and shipped our pod, locked up our storage unit, and got on a plane to Dublin, Ireland.

After an overnight flight, Seattle to Dublin, we picked up our rental car (Karl was designated “wrong-side-of-the-street” driver) and headed west to Athlone, Ireland. We had rooms booked above Bailey’s Pub and found it using the trusty GPS/Maps on Karl’s phone.

Recovering from jet lag with our first Irish Guinness, and a good night’s sleep, we continue west towards the western side of Ireland, the Wild Atlantic Coastal Coast, and Galway.

We do a counter-clockwise circle route for the next week trying to stay on the smallest back roads we can find. These roads are narrow, and often with high hedges on both sides of the road. If another car comes in the opposite direction, you need to slow to almost a complete stop, pull over to the left as far as you can to let them squeak by. Most of the hedges are covering rock walls, and not surprising quite a few cars have their side mirrors missing or damaged!


The Galway countryside is covered in rocky fields, rock walls, rock houses, barns and churches. An especially rocky area is known as The Burren. The hills are solid rock and the stone fences stretch into the distance dividing up pastures that are almost solid rock. Sheep and cows graze everywhere. You even have to share the narrow roads with the farm animals. In case you wonder, we assumed that cows have the right-of-way!

Continuing south towards the Dingle Peninsula, we travel through County Clare and County Kerry. We stop at the Cliffs of Mohr, and many more isolated areas all along the coastal road. Evidence of the impact of the struggles and conflict between the British and Irish, the potato famine, and immigration is everywhere in this part of Ireland. Some of the locations are haunting. Also of note, most of the road signs are in Irish with English as a second language.

We stay in a variety of accommodations including B&B's, Inns, and small hotels. Sometimes in the middle of towns and cities, sometimes in isolated islands with a view of an ancient fort.

We sample a variety of Irish food including the "Irish Breakfast" (eggs, toast, potatoes, sausage, fried tomatoes, and baked beans!), fish and chips, shepherds pie, oysters, seafood chowder, steamed mussels, etc. Beer and gin & tonics are also sampled/consumed from local offerings. Curiously, a gin & tonic is served in a large round stemmed glass, similar to what we would use for a red wine. The people in Ireland are super friendly and helpful.

We make a special stop in the town of Doolin to check out “McDermott’s Pub”. The pub has an epic reputation for traditional Irish music, and since Nora’s maiden name was McDermott it was of special interest to her. We were too early for the music and a drink, but we chatted with the two young men working there. One was a McDermott. The pub has been owned and operated by the McDermott family since the mid-1800’s. The walls and beams of the pub are covered with police and fire fighter badges from all over the USA. Apparently, visitors leave them as evidence of returning to “the homeland”. 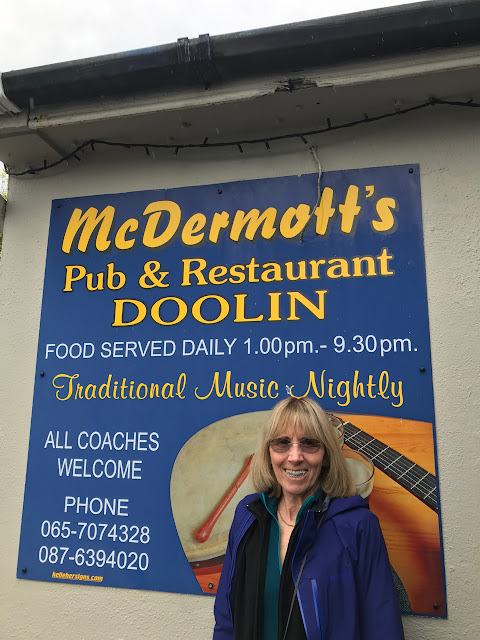 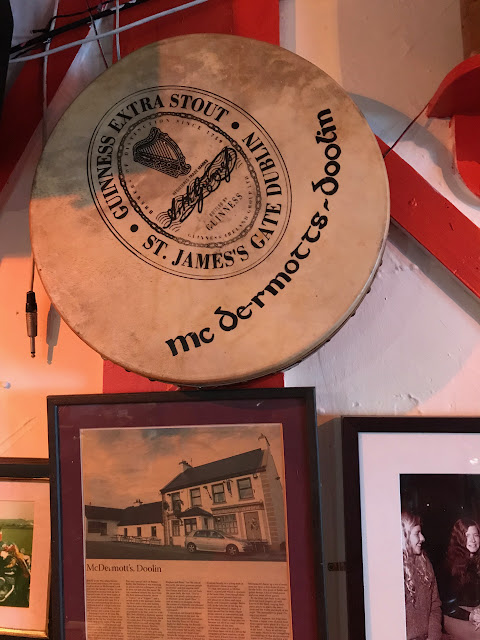 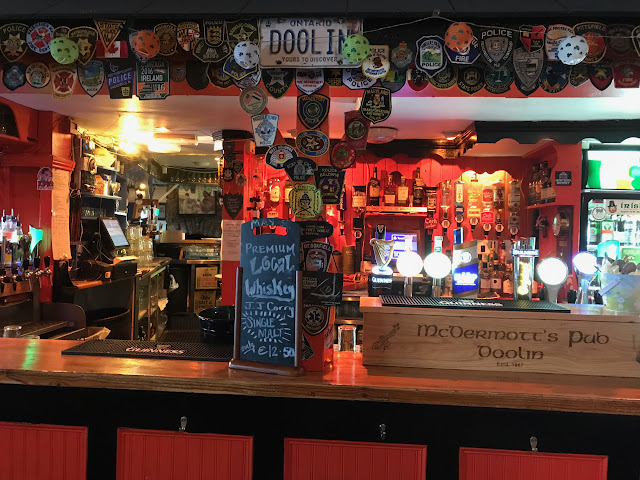 After the Dingle Peninsula, we circle south and east for a few more days and work our way towards Dublin. This part of Ireland is greener and more “modern” than the north west.

We spend a night in Dublin, return the car, and board the plane for part two of the “European Adventure”… the Netherlands Barge trip.