There’s adventure out there!
And, we're ready to find it …again!  Two years ago, we moved on-board our dream boat, a Nordhavn 55 we named Bravo. We cruised the east coast from Florida to Maine and back to Florida. Our many adventures were logged in our previous blog www.n55bravo.com. Unfortunately, a little over one year ago we decided to put our cruising plan on hold.


Life happens. We sold the boat in January 2018, came back to Bellingham, Washington, bought another house, and tried to settle into life on dry land. After nine months, we had enough. All we could think of was getting back on a boat. So, we put the house on the market, and spent our free time perusing boats for sale.

Friends and family thought we were either totally crazy, or on top of the world. Our son said, “What will I tell my friends? You are stressing me out!”.

The house sold in February 2019 and we began a serious hunt for another boat. The search took us to Seattle, Washington; Dana Point, California; La Paz, Mexico; Sydney, British Columbia; and finally back to the east coast. We found our beautiful boat in Hilton Head Island, South Carolina. She is a 2016 Nordhavn 63; specifically, N6309 (the 09 indicates it was the 9th boat made for this model).

We spent a couple of days looking at all the nooks and crannies.

Nora tested out the dinghy too.

We were thrilled to find this boat. Thanks to our friend and faithful broker, James Knight, we closed on the sale on April 30 and plan to be on board by early June. Since we are picking up where we left off, her name will be the same as the previous Nordhavn 55, “Bravo”. The fine staff at Signs by Tomorrow in Bellingham came up with a beautiful design for the name on the transom. 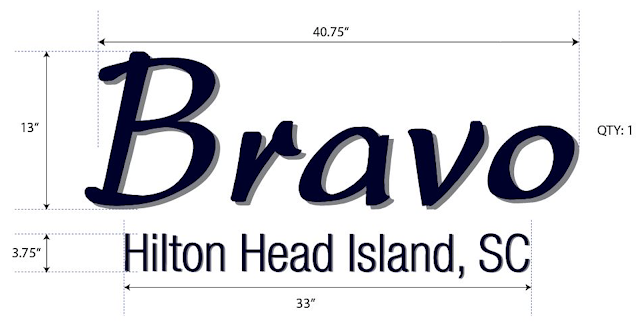 We will install it when we get back to the boat on Hilton Head Island in June. In the meantime, there is a lot of work to be done.

Since this is the third-time we will be full-time live-aboards, we are starting to get into a routine… sell house, sell cars, and sell as much furniture as possible. Reduce the possessions that must be stored; and choose carefully the items you need to take with you.

We made arrangements for a pod which will be loaded in Bellingham and shipped by mid-May, with delivery to Hilton Head Island around June 1st. Then we unload the pod, find a place for everything and prepare to head north before June 10th. 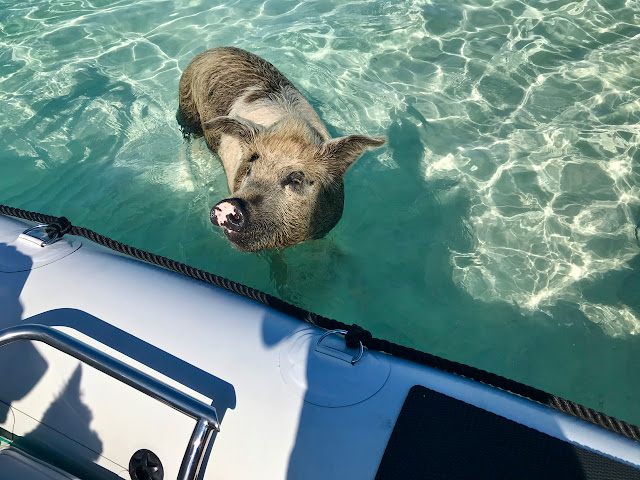 Swimming Pigs!! One of our next stops is the anchorage known as “Pig Bay”.  It is adjacent to Big Major Cay and Staniel Cay. We grab a bag of veggies, hop in the dinghy, and head for the beach. As soon as we approach the beach, the “greeting party” wades and swims towards your boat… large ones, small ones, striped and polka-dotted pigs. All of them hankering for a snack! A friendly greeting as we arrive to the beach. We start to attract a crowd. Much to our surprise, some of these rascals are much bigger than anticipated! Good bye little piggy! This herd of pigs hangs out on the beach and waits for cruisers to feed them. It’s become a tourist destination, but there were only a handful of people there when we stopped by. Staniel Cay We leave the pigs to relax in the sun, dinghy to Staniel Cay and wander around the neighborhood. Very low key and funky. Tiny cottages cling to the rocky shore and the water is unbelievably crystal clear. Letting us know
Read more