Nordhavn Rendezvous 2018 aka NAPS (Nordhavns Around Puget Sound)
Last June, a small group of Nordhavns and owners gathered informally at Port Ludlow for a weekend of potlucks, dock walks, boat tours, and general comradery. The main instigators for this escapade were Kevin and Alison on “Red Rover” and a fabulous time was had by all.

We were lucky to attend as guests of Dennis and Julie Fox aboard their Willard Trawler, “Julie K”.  Dennis and Julie are long time serial Nordhavn owners, their most recent one being a Nordhavn 76, “Sea Fox”.  In 2004, they were participants in the Nordhavn Atlantic Rally where a group of Nordhavns crossed the Atlantic, and they have spent numerous seasons cruising the Mediterranean, Mexico, and US east and west coasts. Dennis was a tremendous help in finding our first Nordhavn, and throughout our first year of east coast live-aboard cruising. This wonderful weekend fueled our desire to get back on the water.


Also aboard the “Julie K”, as a guest of Dennis and Julie, was James Knight. James was hopping on and off so many of the boats that the “Julie K” finally posted a sign...”James is Out” or “James is In”.


Don Kohlman from the Seattle PAE office joined the group for Saturday night dinner and PAE chipped in for the fabulous ribs and chicken dinner enjoyed by all.

NAPS 2019
Fast forward to May 3-5, 2019 and a larger group of 20 Nordhavns gathered, this time at Cap Sante Marina in Anacortes, WA for another weekend of fun.

Nordhavns as far as the eye can see!

Nordhavns of all sizes were there for the fun. Boats and owners in attendance ranged from N40's to N63's, and even a N56 Motorsailer, with home ports around the world.

Kevin and Alison on Red Rover provided an encore performance and were instrumental in a very successful second rendezvous.

Cap Sante Marina was the perfect spot to gather. A large party barge with tent and BBQ deck was right next door to Red Rover. 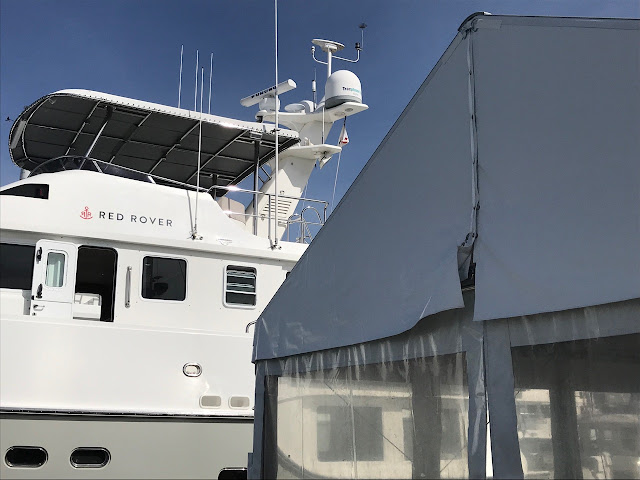 PAE again generously contributed funding for the food, and their new Anacortes sales rep Devin Zwick was mingling with the crowd. Frank Durkesen, long-time and well known Anacortes boat guru was also walking the docks and enjoyed the dinner with the gang.


Their faithful sea-dog, Zoe was patient throughout the preparations...

But when dinner was served, she was ready to trade one of her favorite toys for some of the “grub”! 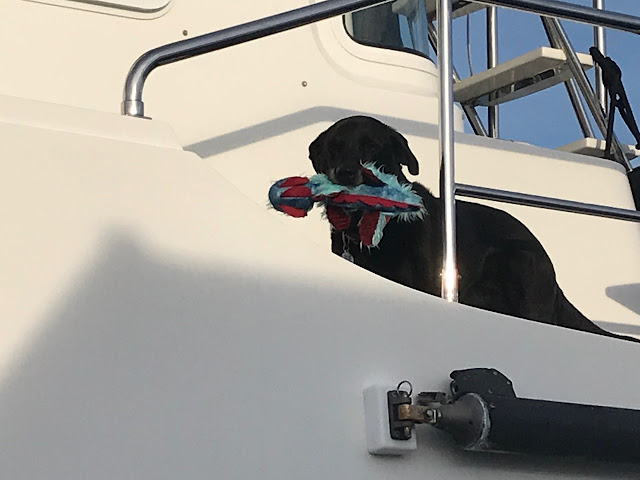 Since we are in the “packing-the-pod” mode, we were short on kitchen facilities and/or culinary resources. However, we still had several quart jars of our own homemade pickles to share. Well, they were a popular addition to the dinner menu... the last pickle being spotted on someone’s dessert plate next to a piece of cheesecake! Based on popular request, we are including the recipe, instructions, and some photos from our “production” last August.

Make brine
Combine brine ingredients and heat. Needs to be boiling when ladling into jars.

Prep ingredients
Wash cucumbers with brush in cold water. Slice off about 1/16” off of blossom end of cucumber (opposite of stem end).
Wash jalapenos in cold water. Slice into one inch rounds retaining seeds.
Clip dill heads from stems. Wash in cold water and drain to dry.
Peel garlic cloves. Lightly “wack” each clove with side of knife just prior to putting into jars.

Bake
Stand jars in bake pan and set in pre-heated oven at 150 degrees for 10-15 minutes.

Fill and seal
When close to being ready, be sure the brine is boiling.
Remove 1 jar at a time from the oven and set on towel on counter. (Protect counter top from heat as needed and use tongs or pot holders to hold jars)
Fill each jar with boiling brine to less than ½” from top of jar.
Immediately place new sterilized lid on top.
Repeat with each jar from the oven ensuring that the brine stays hot/boiling.

Put rings on jars and listen for "popping" to ensure jars are sealed.

NAPS 2019 cont.
Discussion of the upcoming Nordhavn Taco Run... Seattle to Southern California, and further to the tip of Cabo... Sea of Cortez... was a topic of much conversation. A group of Nordhavns will be gathering in September 2019 to head south and escape the grey and rainy northwest winter.

We walked the docks and spotted our friends 32' Nordic Tug, "Kittiwake" for sale. Paul and Kim up-sized this spring to a 37' Nordic Tug and are heading out to the island adventures again this summer.

After dinner, Murray and Rebecca were gracious enough to welcome us aboard their N63, "Operata De" to check some measurements and to see how they outfitted their gorgeous boat. We are really jealous of their diesel hydronic heat!

Sadly, at the end of the night, we had to leave the group and drive "home" to Bellingham. Our count-down to moving aboard "Bravo" continues. One week to Pod loading. Two weeks to departure from the Northwest. ETA in Hilton Head Island, beginning of June.