We Arrive In Maine!


Kittery, Maine
The next morning Bravo and Worknot head northwest to Kittery, Maine and get mooring buoys in Pepperrall Cove. We were here two years ago on our N55 Bravo. At that time, all of the Kittery dockside facilities were closed and under renovation. It was great to see the renovations were complete and the amenities include an outdoor restaurant, fabulous ice cream stand, small store, and a large multi-level indoor restaurant and event space. Everything looked busy and prosperous.

Docks were full and we were told by the harbormaster that the waiting list for a mooring ball is 15 years! We especially like the decorative touch of shark fins on the entrance to the dock ramp. We decide to skip the shark fins and make chicken teriyaki skewers on our BBQ instead.

Perkins Cove
We meet up with more “long time no-see” college friends Mike and Susan who live in New Hampshire. They take us on a drive along the Southern Maine coast to one of their favorite lobster restaurants, Barnacle Billys. We order, and head out to the deck for waterside seats. Mike and Susan order the largest cooked lobster we have ever seen... 3.75 pounds! They claim that this is “small” for them. They often order a 5-6 pound beast!

After a big lunch, including homemade blueberry pie, we stroll the waterfront and check out the funky hand operated drawbridge that is raised by passing pedestrians to give boats access to tiny Perkins Cove. North to Portland, ME
The next morning dawns foggy, foggy, foggy. After waiting and debating, we decide to depart Kittery and head out for Portland, Maine. It is a long day of cruising in the fog. Except for brief moments, we cannot see Worknot ahead of us. Luckily, the fog clears enough to make the turn into Portland and we initially anchor at Pomroy Rock which is just outside of the entrance to Portland.

The junior sailing fleet is being towed into port, and just as we are settling in for the evening, the fog returns. 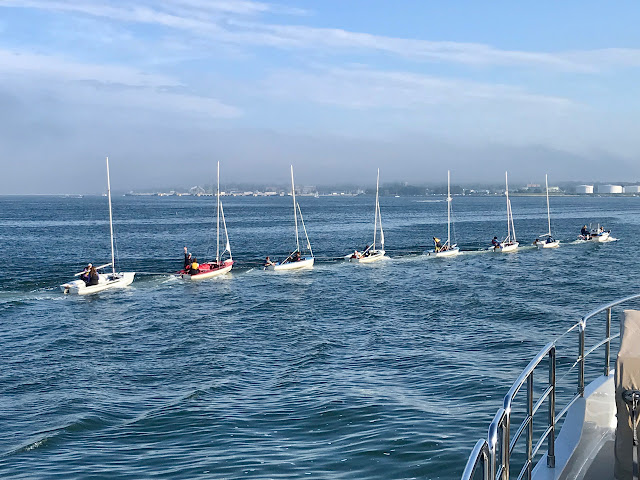 South Portland
The next morning dawns sunny and clear so we head up the Fore River to our moorage at South Portland Marina. We are docked next to Worknot and plan to spend 3-4 days to collect mail, wash the boat, change zincs on the dinghy, provision, and check out the city. 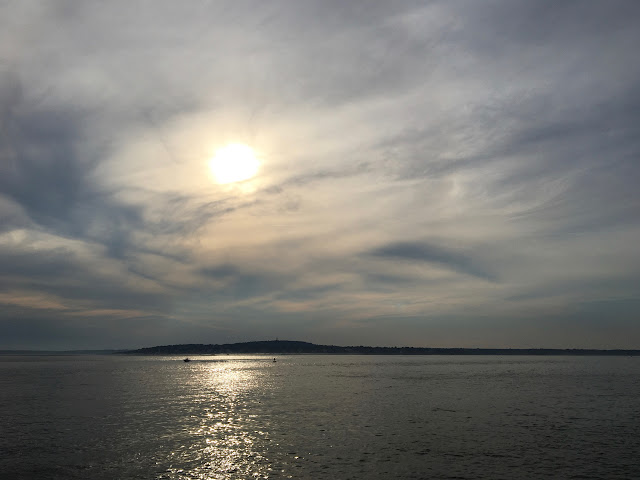 We are really excited because the mail includes our first Nordhavn mileage pennant. Nordhavn encourages owners to document their voyages and issues pennants in mileage increments to display these travels. Our first pennant, for 2,500 nautical miles, arrived and we proudly fly it from Bravo’s bow. We hope to be eligible for the next pennant, 5,000 nautical miles, by the end of 2019. 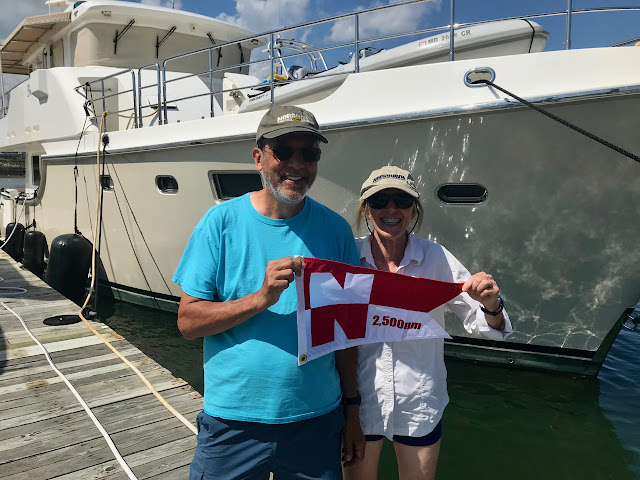 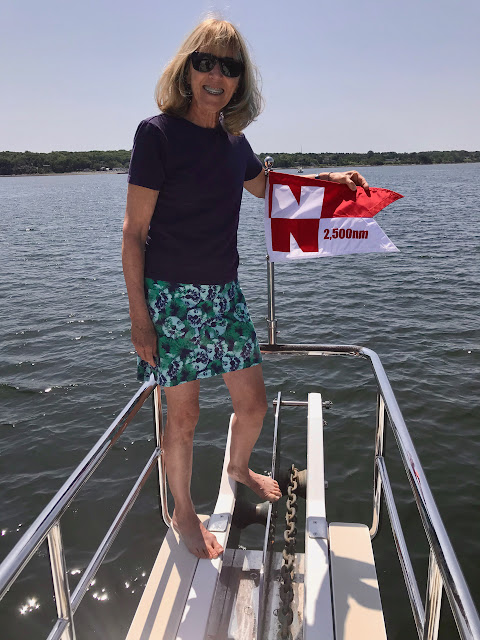 On Sunday we unpack our folding bikes, gear up, and head across the bridge to Karl’s dad’s old neighborhood. Our first stop is St Louis Church, the Polish-speaking Catholic church that Karl’s dad, Ed, and his family attended growing up in Portland. 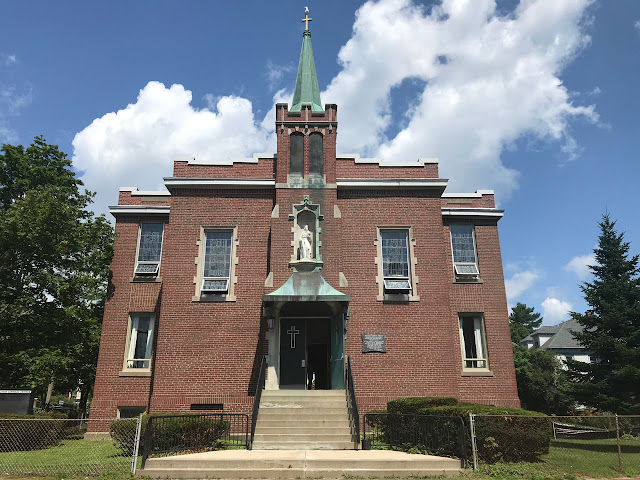 Since it is Sunday, we can go inside the church and find the stained glass window named in memory of the Klewiada family. We also find a Holy Name Society plaque noting Joseph Klewiada (Karl’s grandfather) as a member. 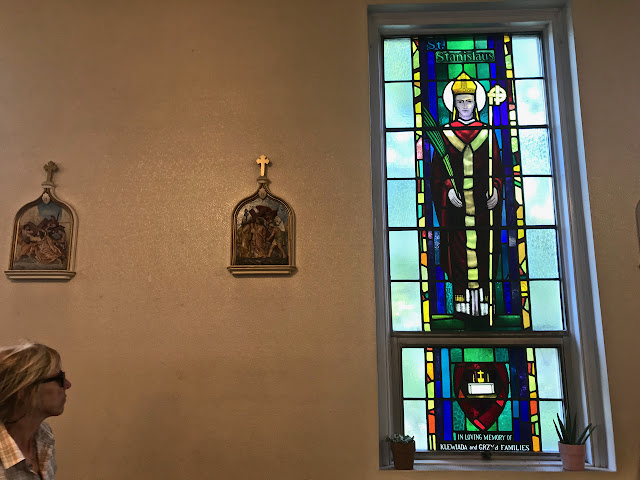 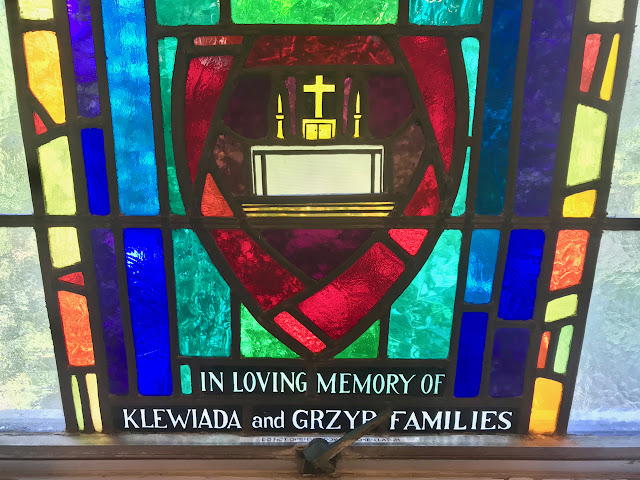 We continue our tour of South Portland and head to Summer Street, where Ed grew up. The house is gone, replaced by a large garden. Karl remembers a boy named “Jay” who lived next door to his grandfather’s house. We talk to one of the neighbors, but he did not know Jay. However, he filled us in with some of the local neighborhood history.

We wander the back streets, cobblestone roads, and bike paths of Portland looking for the cemetery where Joseph Klewiada is buried. After much searching, we find the headstone in Calvary Cemetery. 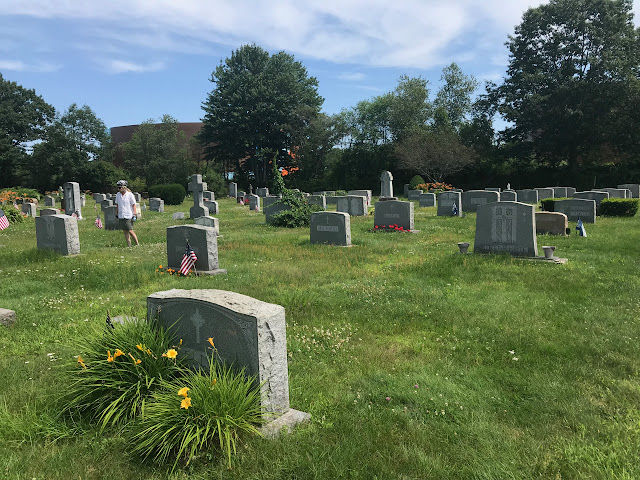 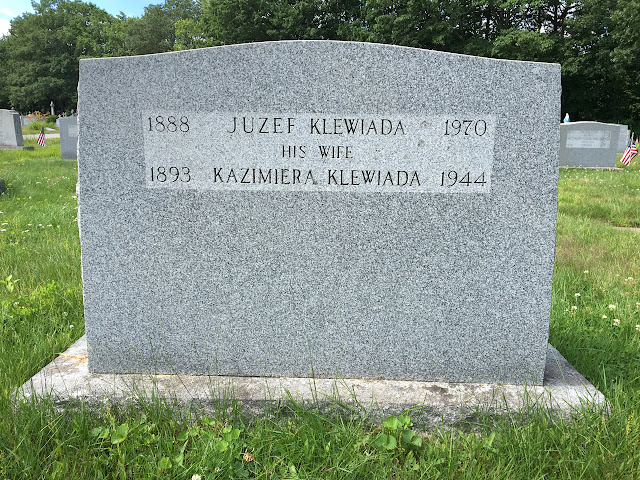 One of the “chores” for the Portland stop is Nora’s hair appointment. She Googled hair salons near the marina and found one that could take her on short notice. Wow... what a surprise awaited us. The stylist, Karen, recognized the name, “Klewiada” and asked if we had relatives in Portland. As it turned out, she and her mom lived on Summer Street, and rented the downstairs apartment of Karl’s grandfather's house. And her cousin “Jay” lived next door with Karen’s grandmother. Small world indeed!!! We found Jay! He now lives in Germany. Karen texted Jay and he vividly remembered the Klewiada family.

Our location on the south side of the river gives us a great view of downtown Portland, especially at night! 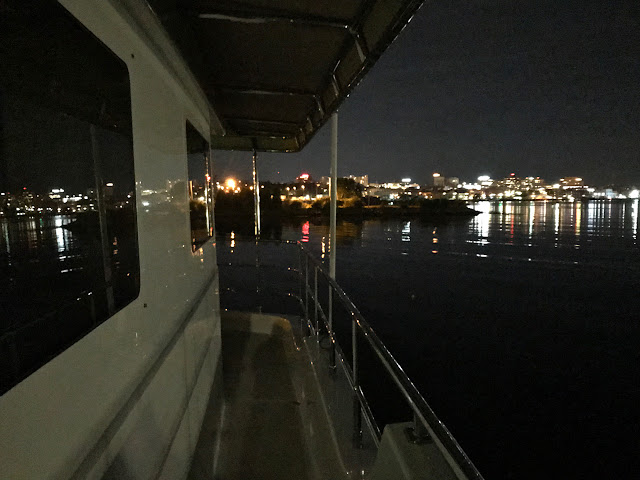 The South Portland Marina has a shallow entrance, and we depart at high tide the following morning to continue our journey northwards. Worknot will remain in Portland for another week to perform additional maintenance as they await the arrival of a friend who will be joining them for a couple of weeks.